Leigh Mcilravy has been with Tarte for many years and is one of the friends I made in my years at QVC. This last weekend she got married in one of the most beautiful ceremonies I have ever seen. She and Bryan were surrounded by people in their lives who love and support them, and it was a perfect celebration and send off for their life together. Everything was gorgeous. You can tell that there was a lot of thought in every detail. Even walking in from the car, the lights hung over you and created a magical feel.

The weather was spectacular. Everyone gathered outside for cocktails before the ceremony.

The music was provided by a string quartet as champagne was served.

Courtney and I were both relieved the invitation was cocktail, as it gave us both an excuse to wear black! Lol!

The ceremony was in a beautiful area over a little bridge in front of a gazebo. Here is Bryan and his groomsmen walking in. I know they look like they are cast for the role. It was an exceptionally good looking wedding party all around.

Leigh’s mother, Linda Mcilravy was glowing with happiness for her daughter. I was so surprised when I met her. She really does look more like Leigh’s sister!

Leigh’s sister, Susan was her Maid of Honor. Obviously, beauty runs in the family.

The Ringbearers stole the show, how adorable are they?! James, (the older), was determined that Jackson was going to get down that aisle and took control of the situation very well.

Leigh is always a beautiful girl, but walking down the aisle with her father Paul, her happiness made her one of the most beautiful brides I have ever seen.

You can tell that there is a lot of love and respect between Bryan and his future inlaws, as he gives Leigh’s father a hug before taking her hand. 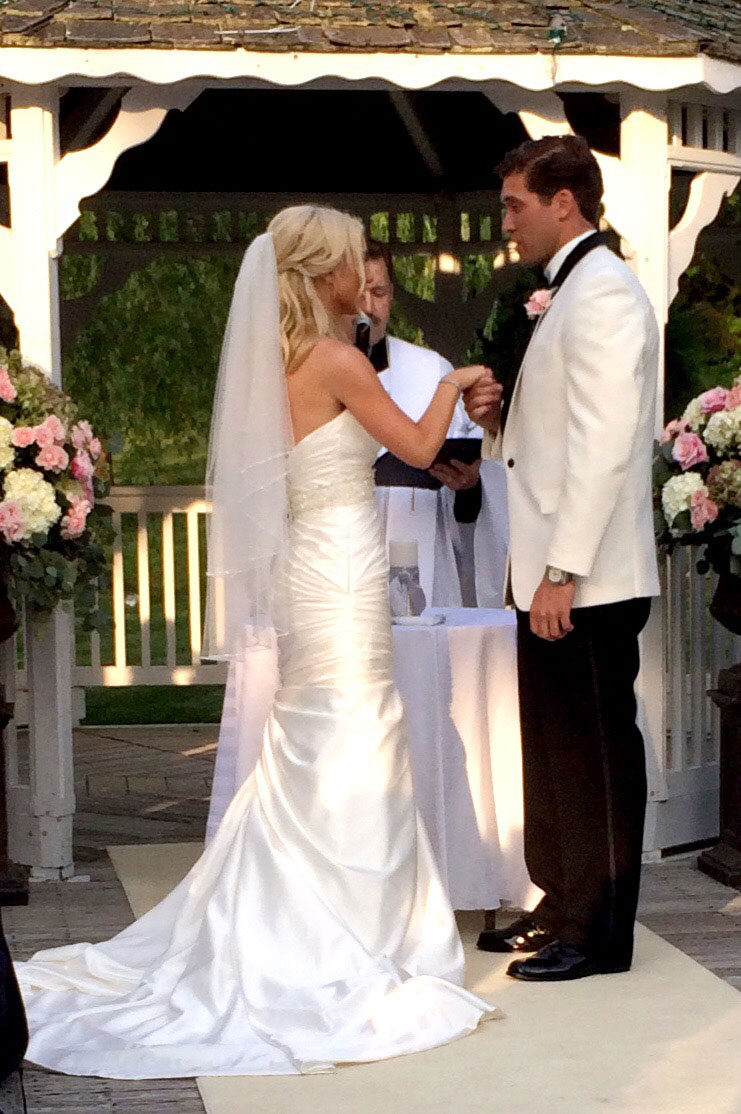 Truly a storybook couple. It was one of the most tender and poignant ceremonies. At one point the words were, “this is the hand that you will hold when you are young and strong and your love is new, this is the hand you will hold when you are old, the hands that will support and care for each other”. My memory does not do it justice, but you get the idea.

After the ceremony we all went inside. There were tables and tables of food. When we had a chance to talk to Leigh and Bryan he was laughing that I thought this was dinner. He said, “oh no, this is a New York wedding. You’re going to be eating until 1 in the morning!” And he was right!

After the buffet of appetizers we went into a beautiful room for dinner, dancing and toasts.

The couple had their first dance as Man and Wife, the toasts were given, orders taken for dinner….

And then it was dancing time!!!!!! I have never enjoyed a reception more. The band was unbelievable! Everyone was on the dance floor, no encouragement needed. It was packed all night!

They had a “photo booth” and you know Alberti, Courtney, I and Brett, had to get in on that! (Occupational hazard :)

Leigh and Bryan were excellent hosts, are great friends, and will always be one of the best looking couples I know. They look like they should be on the wedding cake in miniature!

Thank you for letting me be part of your special day.